These days it’s nice to have something light to read and while Wooing Cadie McCaffery by Bethany Turner had some serious topics, it dealt with them in a lighter way than most books might have.

The book is definitely Christian, yes, but it isn’t a preachy Christian fiction book. It’s very real, authentic and points out some of the struggles within the Christian faith, especially when it comes to relationships, sex before marriage, and dating in general.

Lest I make this sound like a serious book, however, let me assure you there is some serious humor in this book. Humor and characters you will fall in love with. Cadie is an employee in the accounting department of a sports channel similar to ESPN. Her best friend, Darby, works with her in the same department.

Cadie’s boyfriend is Will Whitaker, a researcher within the company who will eventually become more of a face of the company when he lands a big story.

The book begins with Cadie and Will meeting each other but continues four years later when Cadie has just about given up on Will ever proposing to her. And since he won’t propose she wonders if their relationship has any real future. An incident within them leads Cadie to break up with Will and Will to strive to become the man she wants him to be and “woo” her back. Humor abounds during this process, involving Cadie and Will, their boss Kevin, who is a retired famous NBA player, Darby, and Cadie’s parents.

Cadie is a hopeless romantic, which is part of her problem throughout the book. She seems to think her life will play out like a romantic comedy, but is thrown off kilter when life instead starts to play like a tragedy.

Cadie’s mother is a well-known personality within the Christian world and the host of a show on a church network. There are times Cadie feels like nothing she does is right in her mother’s critical eyes and when she and Will separate she dreads telling her mother about the incident that led to the breakup, afraid her mother will lecture her about her failings as a Christian.

Cadie’s parents certainly don’t make it any easier on Will either, since he feels they’ve already told him he doesn’t measure up for their daughter. Adding to the complication for Will is the fact that the career he always wanted is taking off just as his personal life is crumbling. He’s almost ready to give up the career to win Cadie back, though, and he decides to recreate scenes from some of her favorite romantic movies to do it, which definitely allows for some hilarity to ensue.

This book switches between first and third person every other chapter and at first I found that distracting, but Turner pulled it off by creating an entertaining plot and lovable characters. All of Cadie’s chapters are told in the first person and all of Will’s in the third. This allowed Turner to let the reader see into the mind of each of the characters throughout the book.

For anyone looking for a fun, light ride, with a little bit of emotion tossed in, and who isn’t these days, then I would definitely recommend this one. 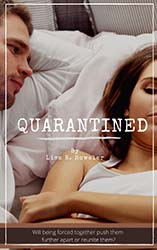 I'm a mom, a wife, a writer, a photographer and a former journalist. I write a little bit about a lot of things on my blog Boondock Ramblings. In September of 2019 I self-published my first novel, A Story to Tell and published another one, A New Beginning, in May of 2020. I enjoy John Wayne and Cary Grant movies, Jan Karon's books, and I have an electic taste in music. Welcome to my blog and feel free to poke around. Fridays are Fiction Fridays, where I share a piece of fiction I'm working on.