Here we are to our weekly update, which is actually a bi-weekly update for me. Other bloggers who participate in the Sunday Salon usually write a weekly post, but honestly, there are some weeks I haven’t done or read or watched anything worth writing about. Some weeks? Ha! Most weeks. Anyhow, the Sunday Salon is a blog link up on Readerbuzz’s site that mainly focuses on what the bloggers have been reading in the last week, but also what they have been watching or just doing.

Last week I actually managed to finish a couple of books- one of them in one day. I can’t remember ever reading an entire book in one day, unless it was a child’s book, but this one was only 163 pages.

The book, Bleachers by John Grisham, isn’t a book I would normally read. It was about a former All-American football player who returns to his hometown when he hears his high school football coach is dying. The story revolves around a dark history between the player and the coach, but also between the coach and other players on his past teams. The coach was undefeated for hundreds of games, won many state championships and was treated like the king of the town for the most part.

Waiting for the coach to die creates a type of vigil among the former football players as they relive their histories together and with the coach. And yes, I did cry a little, but not too much because I’m really not a sports person with my opinion closely in line with one of the side characters who says how ridiculous she found it that an entire town worshiped a bunch of adolescent boys and their coach simply because they could run a ball down a field. Still, all in all, I enjoyed the book and I’m glad I took the time to read it.

I read it after my husband and I watched John Grisham and Stephen King on Youtube talk about writing and their books and their books that were made into movies. My husband like John Grisham’s earlier books and pulled this one off his shelf and handed it to me. I’m sure he figured I’d do what I do with other books he recommends and ignore it, but this time I didn’t, maybe because I enjoyed listening to John Grisham talk about life and writing and felt like he’d someone I would get along with.

I fell into a Youtube spiral from the one interview with Grisham and stumbled on to his writing regimen, which intrigued me since I’ve been working on my own novels. He said he starts a novel on January 1 of each year and blocks out six months to write it. He wakes up early, starts writing at 7 a.m. and strives to write 2,000 words a day on a good day and 1,000 on a bad day, but as he said, “most days are a good day.” I thought that setting 2,000 words a day as a goal was a bit high, but Grisham is fairly prolific, even if he isn’t selling as many books as he used to (his own words).

As for other books I’m reading, I finished A Lineage of Grace by Francine Rivers and am quickly clipping through In This Mountain by Jan Karon, but I never want to finish Jan’s books quickly. I enjoy meandering through them, much like she meanders through them. I’m not against a meandering book if it is still entertaining. I’m also dragging myself through the book slowly because I know Jan’s going to kill off one of my favorite characters in this book and I know I’m not going to handle it well at all. I’ve been following the character for 7 books now and he feels like a close relative. I’m fairly certain I’ll be mourning him for a few days after I read it.

I’m contemplating a Jack Reacher book since my husband is a huge Lee Childs fan. The book is sitting there in my Kindle to read so I’m sure I’ll get to it this week.

I’m also considering starting The Hobbit by JRR Tolkien since it is the book our homeschooling group is reading for the first book discussion of the year in September. I’m forcing my poor, put upon, 12, almost 13-year old, to read from it a half an hour a day so we can at least discuss it some at the meeting. I’m waiting for my son to ask, “Why can’t I just watch the movie?” I think we tried that already and barely made it through (why are those movies sooooo looooong?!). I can’t believe I’ve never read the book, which I’m sure my husband and brother are horrified about. But, actually, I haven’t read a lot of classic books, so this shouldn’t surprise them in the least.

Books I am still reading include: “All Things Bright and Beautiful” by James Herriot; “The Cat Who Played Post Office” by Lillian Jackson Brain; “In This Mountain” by Jan Karon; and at night I’m reading my daughter “Paddington Takes the Test” by Michael Bond.

Besides reading, we’ve had a couple outings these past couple weeks, with the main one being a trip to my old college town – Mansfield, Pa. – for a picnic with my brother and his wife and my parents and then a concert with my parents. The concert was with The Isaacs, a popular Southern gospel group. One of the singers is known for writing Martina McBride’s song “I’m Going to Love You Through It”, based on The Isaac’s founding member Lily Isaac’s battle with breast cancer, and other well-known hits.

I don’t have many photos from the evening because we were pretty far back from the stage. I do have a couple photos of my dad with Becky, one of the sisters who sings in the group, but she looks annoyed. We found out later, when my dad talked to Lily, that Becky wasn’t annoyed – she was sick and on an antibiotic and their travel schedule, which is on a tour bus, had been taking its toll.

This was my first time hearing The Isaac’s and I was very impressed. Their harmonies are amazing and their talent playing instruments, especially Sonya on the mandolin, was very impressive. I thought I’d link to a couple of their live performances in case any of you are interested in learning more about them. They are widely known among anyone who is familiar with Bill and Gloria Gaither’s Southern Gospel tours and live shows.

And my favorite hymn (though the story behind it is heartbreaking) that was sung when I was baptized.

Our other outing over the last couple of weeks was pretty tame – a trip to the local blueberry patch. The sun was blistering hot and the gnats were out to eat us alive so the children didn’t last long at first, but once the sun went behind some clouds we were able to get some more picking done. 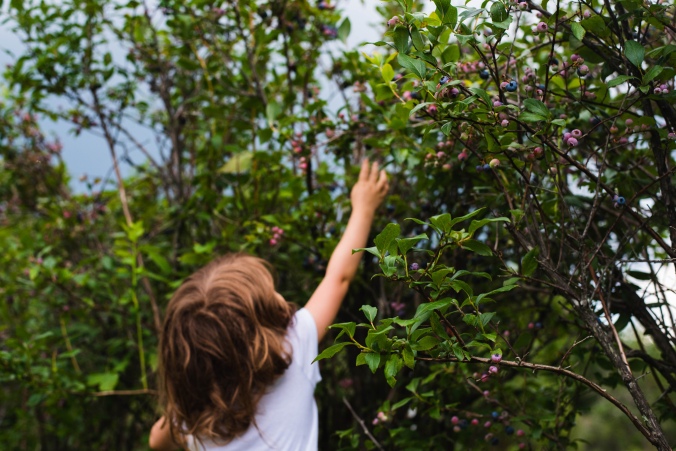 That day was the most relaxed I’d been all week and I was able to push through my normal aching muscles and exhaustion and almost forget about it as I picked. We ended up with 7 lbs of blueberries and I think I ate most of them myself. I’m not really a baker so my daughter didn’t get the muffins I had planned on making her, but hopefully, I’ll make that up to her if we make it to the farm for another trip soon. 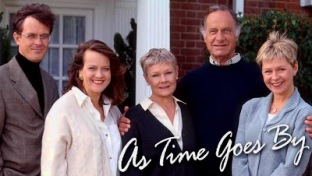 As for what I’m watching: I’m on a British kick again and have pulled my husband into it. We’re now watching ‘As Time Goes By‘ to escape the depressing news these days. The show is a fairly light Britcom with Judi Dench and Geoffry Palmer. My husband, who doesn’t usually watch shows like this one, enjoys the chemistry between Judi and Geoffry and I do as well. I first watched in when it was on PBS years ago and I was living alone in my old house. It was a nice distraction from my day job at a small-town newspaper where I often covered some fairly depressing news (car accidents, fires, child abuse, murders). I’d never be able to do that job now. I compartmentalized back then. Now it all spills over and I cry over the news. Not that I didn’t cry back then. I did, but I waited until I got home.

So what have you been reading, watching, doing? Let me know in the comments or leave a link to your post at Readerbuzz.

15 thoughts on “Weekly Review in books and life or the week I actually read a book in a day.”