You might remember my prediction that our first attempt at a garden may be a disaster.

That prediction has proven to be fairly accurate as shown by the weeds attempting to choke out the few plants that did survive the initial stages of planting a month and a half ago.

First, I missed the memo about planting everything in neat little rows. There definitely isn’t anything neat about our garden and not really any rows at this point.

I didn’t read packages right and failed to space the seeds far enough apart, as well. Then there was the week long rain that started the day after I planted. I’m convinced it washed away a good portion of my carrot seeds.

I am a total garden newbie so when I started yanking out weeds and didn’t see carrot tops sprouting where I thought they should have been I ended up ripping out a few carrot seedlings. I thought they grew a lot faster than they actually do. Whoops.

One side of the garden never even got planted and the weeds know it and have taken residence there, creating what is going to be a town violation at some point if I don’t get in there and yank out more of those pesky, pointless plants. It seems as soon as I weed one part I return the next day to find 1,000 more. Who knew weeds could grow so fast.

This week we harvested two little summer squash and you would have thought I’d won the lottery. Little Miss and I ran in the house and proudly displayed the little veggie to the boys, who were appropriately impressed but not as over the moon as we were. 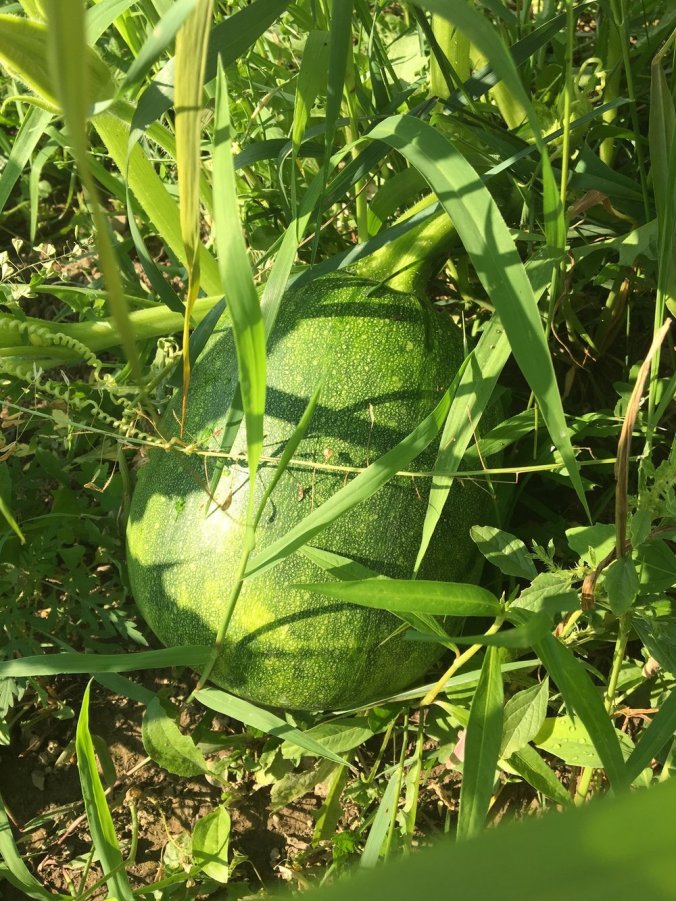 There is currently something growing where I thought I planted cucumber. I thought it was zucchini but now it’s rounding out like watermelon and I truly do not remember buying watermelon seeds at any point, let alone planting them.  A quick message to my dad and he said it’s a pumpkin growing, which is very upsetting to me because we now have four official pumpkin plants and two more trying to grow by my house. I had no idea simply dropping pumpkin seeds could lead to plants sprouting up all over the place.

I guess I’d better start searching the internet for pumpkin recipes now. And now to freeze pumpkins, carve pumpkins and convince others to take pumpkins away from us.

So at this point, I’m fairly certain we’ll have at least some summer squash, no cucumber, maybe some butternut squash (need to Google and find out when that usually starts to make an appearance) and I’ve learned that I can plant spinach and kale later in the season so I’ll be trying that too.

How about you? Do you garden? Does your garden thrive or barely survive?