I’m in the midst of the same books I’ve been reading, so I don’t have a lot to report on the book front for this week for the weekly “Sunday Salon”.

First a little bit about when I read and how (playing off my brother’s post from last week). I read any hardcopy books during the day and books on my Kindle I read mainly at night so I can use the backlight on the Kindle, but not use the way-too-bright book light I bought on Amazon for my hardcopy books. So, I usually have at least two books going at a time – one hardcopy and one Kindle.

This week I’m reading the fourth book in The Cat Who series (The Cat Who Saw Red) on the Kindle and the fifth book in the Mitford series by Jan Karon in hardcopy version. I could have bought the Jan Karon book on the Kindle, but it was $5 more on Kindle than a paperback and I got stingy and bought a used copy of it online instead. I bought that used copy and then realized I actually had a copy of the book in my collection so I didn’t need to buy it after all. Oops. Now I have two copies.

I read the Mitford series years ago – or so I thought. It turns out I missed a few books so I’m going back and rereading them. Book 5, ‘A New Song’ takes place on White Cap Island, which is obviously not the main character’s hometown of Mitford. Actually, Mitford isn’t Father Tim’s hometown, but it’s where he’s lived for 16 years since becoming the parish priest of the local Episcopal Church.

If you haven’t already guessed, or don’t know about the Mitford series, the books follow the everyday life of Father Tim Kavanaugh and the characters he meets, adopts, or has becomes friends within the small North Carolina town of Mitford. I can relate to these books because my mom is originally from North Carolina and she is even familiar with some of the towns mentioned in the book, except for Mitford, which is fictional. Plus I live in a small town and some of the characters in the fictional Mitford remind me of real-life characters in the small town I grew up in.

Almost all of the books in the series take place in or around Mitford, with exception of A New Song and A Home to Holly Springs (when Father Tim returns to his hometown). In A New Song, Father Tim has retired from his parish in Mitford and has been assigned, temporarily, to a church on an island, so we are introduced to an entirely new cast of characters, while also hearing from the old ones. 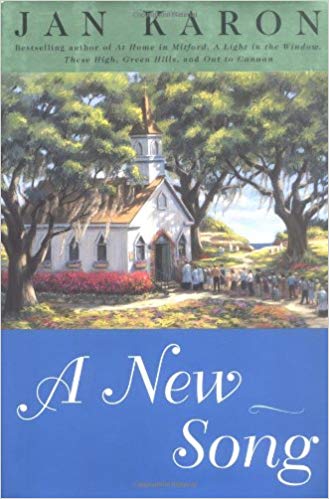 I won’t mention too many other characters other than Father Tim or I’ll spoil some of the books for you. If you’re looking for something hard hitting, you won’t find it in these books. They do feature some tough moments, some moments that will bring tears of sadness to your eyes, and maybe a cringe or two from the seriousness of the subject, but for the most part, you’ll take a peaceful walk with Father Tim, with a bit of drama thrown in from time to time. In other words, you’ll laugh, you’ll cry…etc., etc. You get the drift. I find I run to Mitford when the rest of the world seems to be crashing down around me. It’s a great, often light-hearted escape (unless Mrs. Karon decides to kill off a favorite character or two and then I end up bawling about how her books are too stinking real and life sucks and hand me the chocolate ice cream already!)

The Cat Who books by Lillian Jackson Braun are similarly fairly light, but are mysteries. As I’ve mentioned before, the books follow Jim Qwilleran and his two Siamese cats Koko and Yum Yum. Koko is mysteriously brilliant for a cat and always seems to help Qwill, as he is called affectionately throughout the book, solve mysteries that Qwill shouldn’t even be involved in. Braun refers to Qwilleran as Qwilleran throughout the books. He’s a newspaper reporter who often gets assigned the lame beats, like fashion or cuisine, or something else he deems as beneath him because his start was in the crime departments of bigger newspapers than where he is working now.

I can relate to the Cat Who books for a couple of reasons. First, Qwill is a newspaper reporter, which I was for 14 years and my husband still is. Second, Qwill is in his mid-40s and I’m almost in my mid-40s. Braun does seem to describe him a little too often as graying and old, which reminds me I’m graying and old, but Qwill’s quirky cats and personality make up for that for me.

So how about you? What are you currently reading this week? Want to see what others are reading this week? Then join Readerbuzz’s Sunday Salon, Or Caffeinated Book Reviewer, where other readers (most of them really cool book bloggers, unlike this blogger who is sort of a “whatever blogger) and if you want, add your own post about what you are reading, watching, doing, thinking, eating, or whatevering this week.

For those of us who celebrate Easter – I leave with you one of my favorite Easter songs, adaptly titled “The Easter Song” by Keith Green.